Last month we shared the story of Julia from Guatemala, and the amazing transformation she experienced when she encountered Christ and surrendered her life along with her husband to His amazing grace. This month’s story is about Sebastiana Miranda and her husband. When Sebastiana saw her friend Julia’s life change, she was initially fearful. Julia was her confidant and someone with whom she shared her problems. Julia had been in the same situation and understood what Sebastiana was going through. After hesitating and trying to keep away, Sebastiana came forward, joined the CHE program in her village, and surrendered her life to the Lord along with her husband. The change in her life led her from darkness to light, and she moved from being in Satan’s control to becoming a child of God (Acts 26:18). God has also restored Julia and Sebastiana’s friendship. They are now prayer partners. Today, they have the Lord as their Father, and He has transformed both their husbands into men they can truly honor and respect. 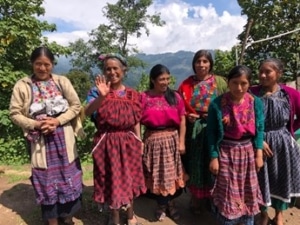 Here is their story:

When CHE trainers from MAI’s partners in Central America, Global CHE Enterprises, came to the local MAM village, they found some of the villagers avoiding them. Among those were Sebastiana Miranda and her alcoholic husband. They lived in a small hut without water or electricity. Sebastiana’s husband’s addiction had left them in extreme poverty, and they were ashamed to come and meet the visitors who had started the CHE program in their village. “Surely there is nothing they can do for us,” they thought.

But when Sebastiana’s close friend, Julia, and her husband’s lives changed, Sebastiana began to have hope for her husband and herself. However, she was afraid and hesitated. After some time, while observing her friend and confidant Julia, Sebastiana gathered up enough courage to go and meet the CHE trainers, Nazario and Margarito, and told them that she and her husband also wanted to be involved. In due time, they surrendered their lives to the Lord and started implementing what they had learned about becoming a CHE household. They were regular attendees of the neighborhood Bible study programs and active members of their neighborhood group.

Now they have a home, running water, and a healthy and balanced lifestyle. The poverty cycle they were caught up in, has been broken. They live their lives with dignity and respect. Sebastiana is now an active community member along with the rest of the CHE women. Her friendship with Julia has grown as they pray together for the salvation of others in their village.

No matter how far gone we are, we can never run from, or outrun God; or avoid His amazing love and overpowering grace.

In Acts 26:18- Paul shares his testimony and his task to do the bidding of the Lord in serving the gentiles. He declares that he was sent by Jesus, “…to open their eyes and turn them from darkness to light, and from the power of Satan to God, so that they may receive forgiveness of sins and a place among those who are sanctified by faith in me”.  If you talk to our CHE facilitators, they will each be able to share with you how they have seen that type of transformation in their communities repeatedly.

But the greatest of these is love…