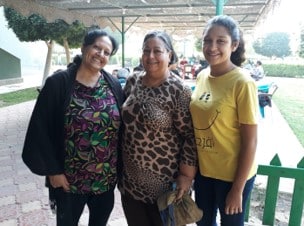 As we celebrate Mothers’ day, I cannot help remembering my own mother who went to be with the Lord a few years ago. She had lived a very comfortable and full life, and my siblings and I have very fond memories of her. She was loving and caring, and she often suffered from various medical challenges. I don’t think I ever heard her complain about her condition. Thank you, “Mummy,” for the example you set for us about trusting God!

This month’s story is about an amazing mother – Taramar. (She is pictured on the left in the photo, and her youngest daughter is on the far right.) I had the pleasure of meeting her when I was visiting our teams in North Africa. A colleague translated for me from Arabic as Taramar shared the story of her journey from anger and bitterness to recognizing the joy of being like soft pliable clay in the Master’s hand. I realized that no one, no matter how far gone, is ever beyond the Savior’s saving grace!

Taramar* joined a CHE home awareness group out of desperation. She had been forced to leave school at a young age and marry her cousin. She railed against God, whom she blamed for her problems. Her husband refused to take his final exams at the Faculty of Dentistry, abruptly deciding not to be a dentist, because he felt God was calling him to become a preacher. Even when a friend gave him a clinic to use, her husband shut it down, causing many churches to no longer allow him to preach.

Taramar had four children when she joined the CHE group. Since her husband brought in no income, she would often ask her parents for money so she could take care of her family. When Taramar’s parents died, she was left with no resource. She was unable to find work because she had no skills or higher education. The local church took pity on her and pitched in with some money so she could feed the children.

Her husband often returned home from his “preaching trips” with an abandoned baby he found on the streets. He expected her to take care of the babies, saying, “God gave them to me to take care of; He will provide.” Only one of their children was their own, their son Peter.

In the next fifteen years, Taramar adopted eight children that her husband brought home. “Ten years ago,” she said with tears in her eyes, “our only son Peter died, but God has blessed us with many adopted children who He has sent into our lives for us to take care of for Him.” Four are grown up, having completed their education and are now working, and one is engaged to be married. Four others still live with Taramar and are in school.

Taramar realizes now that God was very near to her when she cried out in her pain. She is thankful that God has blessed her in ways she never imagined.  “God has given me so much,” says Taramar. “Each one of these dear girls is a believer and knows and loves Jesus.”

No one, no matter how far gone, is ever beyond God’s ability to redeem and transform! Pray for someone in your life who you felt was too far gone. Remember, they are never too far gone for God to bring back.

Integral Mission and the Balance of Word and Deed