Tim Barker, Founder of ROI Ministry (ROIM), was concerned when reading data published in 2001 from one of the most collaborative and exhaustive research projects ever completed revealing the Church’s use of God’s resources. Data was gathered by World Christian Trends Research from hundreds of Christian professors, researchers, ministry and denominational leaders, including some of the most respected Christians in the world.

Through the research, Tim discovered that less than 1% of worldwide Christian giving is used to help the poorest, lost people. He also discovered this is where the greatest lasting impact per dollar was being made. Tim became passionate about sharing this information and thus began ROIM.

Of the millions of excellent ministry partnership opportunities to give to today, how do we choose? Henry Blackaby said, “Find out where God is doing great things and join Him there.” This is a great approach, as “the harvest is ripe, but the workers are few.” Jesus also taught us to “produce good and lasting fruit” 70+ times (in KJV), which gives us a basic blueprint for selecting effective ministries.

ROIM believes that how wisely we give is as important as what we give.

ROIM seeks to find, support, and promote ministries that have high levels of impact per dollar invested. These organizations proclaim the gospel, bring people to faith, or help the poor and needy in the name of Christ—and do so in very effective ways, thus ensuring a high return on investment (ROI) for kingdom giving.

Each year, since 2011, ROIM has identified and published its list of “Top 10” ministries that operated programs in the prior year that reaped significant outcomes with the finances entrusted to them. ROIM utilizes one of the most reputable third-party ministry vetting organizations in the world: Calvin Edwards and Company (CEC). CEC, a philanthropic advisory firm in Atlanta, GA, has extensive experience calculating ROI, and performing similar analyses, for many organizations worldwide. ROIM has engaged CEC to conduct a professional, third-party review and ROI calculation of each “Top 10” ministry program since 2014. In addition to considering kingdom “return,” ROIM has adopted 18 standards that “Top 10” ministries should meet.

Medical Ambassadors International (MAI) was selected for a 3rd year in a row as a “Top 10” ministry by ROIM!

CHE is designed to:

MAI recognizes that the spiritual impact of its work differs greatly by context. Thus this typology:

In the fourth field above 100% of the community have learned about CHE, about 33% are in households practicing CHE principles, and about 50% of those in CHE households have become disciples of Christ. Research has shown CHE results in reduced under-five mortality rates, increased nutrition, reduced incidence of disease, and more.

MAI is celebrating 40 years of ministry in August 2020! It is now expanding, especially among unengaged and unreached people groups in the eight global regions where it works. Through its leadership team, group of master trainers, and program facilitators in the field, MAI has been able to harness the active engagement of well over 50,000 CHE volunteers around the globe.

One of many stories of community transformation…

“I will never become a Christian” declared Tassy as Daniel Kpowbie and his team reached out to her and others in the village. She liked the idea of the CHE program because it would benefit her village, but she was too firmly committed to her Voodoo practice that her ancestors had passed on to her, to let it go! Ironically, of the seven people chosen to be on the village CHE committee, five committed their lives to the Lord at the end of the training. One was not sure, but one was sure, to never become a Christian; and that was Tassy. Her resistance continued even after the training, in spite of the fact that 15 of the CHE volunteers selected and trained later, had all put their faith in the Lord. It took three years with lots of change in the village and going through many CHE lessons, for Tassy’s attitude to finally change! One day, before the CHE group meeting was to start, she walked into the center of the group and declared, “I want to be a Christian!” She shared with the group how she had resisted change earlier, but had observed how the lives of the new Christians had changed. She knew that that was what she wanted. She had waited for three years, observing the behavior of the other Christians to see if it was real.

Today, many years later, Tassy is one of the strongest believers in her village. Under her influence as a CHE committee member, almost 95 % of the village has come to faith in Jesus. A village that was devoted to voodoo has now turned to Christ. 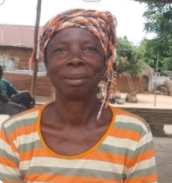 The village is also transformed with multiple CHE households, multiple small enterprises, multiple safe water drinking points, sanitation, a vibrant and cooperating community and a very active church that is actively engaged in outreach and where Jesus is loved and worshipped!

At present MAI works in 2,582 communities around the world impacting a population of over 2.56 million people in 75 countries. The 2018 ROI in terms of financial investment is $1.15 cost per person instructed. A gift of $1,000 provides instruction to 870 people.

An Unusual Gift in Kind!