Life is not always a bed of roses!

The longer one has been around, the more one has experienced pain. However, isn’t it amazing that God intersperses our lives with joy and pain to help us cope with life more maturely?

Last month, I shared a story from Guatemala about weaving. That story took me back years ago when I visited an FEI project in Oaxaca Mexico with my friend Joseph Anfuso. I was facilitating a training program for community leaders on how to prepare a corporate community-owned neighborhood transformation program. It had been a time of breakthrough as people came forward to take responsibility for their own community. I ended the “call to action” session with my favorite How to Catch A Monkey story.

The story was about a village where people caught monkeys to sell as pets. The strategy uses a monkey’s natural curiosity in order to trap it. A small pebble is placed inside a coconut shell which is tied to a tree. This is enough to entice a monkey to investigate! Hearing the pebble move about, the monkey inserts its hand into the coconut.  Once the monkey grabs hold of the pebble, he won’t let go, making his fist too large to come out of the hole. I then explained that, the monkey loses its freedom because it grabs onto something that it will not let go. 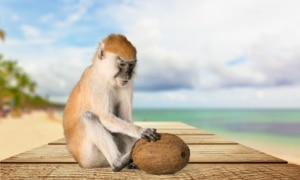 The story had its intended impact and many came forward to share with me afterward how their reluctance to “let go” of something that had hindered their progress and that of their community. Some of those stories were dramatic and it was clear that God had been working in the group to change attitudes and transform lives. Here is the story of Valein:

Valein Romero had actively taken part in our community leader’s discussions. Although she seemed young to be a community leader, she was a university graduate and lead the women’s group. Valein faithfully came to meetings, but it often appeared that she was holding back. Some suggested it was because she had “married into the community” and perhaps felt like an outsider. And so it was the case until she heard the Monkey Story and something changed in her. Valein was standing patiently behind the others as she waited for her turn to speak. “You asked what I was holding onto that was preventing me from being free,” she said, holding up a pink crocheted wrap, “It was this! This is what was holding up my freedom!” 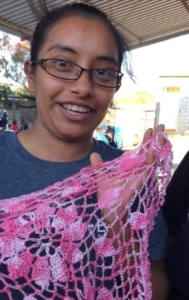 Valein had married her husband, Padro, two years earlier. They had become a part of the community and she was actively engaged in the Bible studies and other meetings that FEI organized. They were soon expecting a baby and Valein registered for the class for young mothers and did everything she was advised. Then tragedy struck. Her baby died shortly after birth and their lives were shattered. For several months she didn’t leave home, and the community planning session was the first one she attended after the loss of her baby. “When our baby died, I was angry with God,” she told me through tears, “I knew when she was born that something was wrong. I was halfway through crocheting something for her when she died. I kept crocheting until it was completed. There are many conversations, questions, complaints, tears, and prayers that got crocheted into this wrap which was intended for my baby. When you told us the story about the monkey not being free because it was holding on to something, I knew the message was for me. I knew what I was holding on to.”

Finally, she wiped away her tears and said resolutely, as she held up the pink wrap for me to see “I want you to give this to your wife. Tell her it is from her little sister here in Oaxaca and request that she pray for me, because I am now free!”

Day by day, and with each passing moment,
Strength I find to meet my trials here;
Trusting in my Father’s wise discernment,
I’ve no cause for worry or for fear.
He, whose heart is kind beyond all measure,
Gives unto each day what He deems best,
Lovingly its part of pain and pleasure,
Mingling toil with peace and rest.

Through pain and pleasure, the Lord balances life with an overwhelming outpouring of His grace!