In 1978, after spending almost three years at Arrowhead Springs helping to launch the Agape Ministry (Christian Peace Corp), Stan Rowland wrote a document at the request of Dr. Bill Bright of Campus Crusade for Christ (CCC) on how to integrate curative care, health education/community development, and spiritual growth. This document became the premise for the Community Health Evangelism (CHE) strategy.

The first CHE program was inaugurated as a clinic/CHE project in Keriocho, Uganda, in 1980. When civil war erupted in 1982, the team moved to Buhugu, Uganda. Three additional projects were developed in Uganda, and two in Kenya, including the Letein Hospital CHE program. These early projects were rural, based on agriculture or disease prevention.

The results were impressive. Local volunteers from ten villages involved in the Buhugu project improved and protected 40 springs and built a 13 km, gravity-fed water system that provided clean water for more than 10,000 people. The incidence of measles in the area was reduced by 40% and deaths due to diarrhea were reduced by 30%. In addition, several individual projects, operating according to CHE concepts, were also successfully carried out by groups within the community. These projects included bee-keeping, seedling-plant nurseries, ponds for raising fish as a food source, and improvements in many home garden plots. The CHE training team also spent as much time in discipleship as in physical subjects. [1]

In 1990 Stan and his wife Rose Mary joined Medical Ambassadors International in Modesto, California. At this point, Medical Ambassadors decided to transition away from supporting clinics, and to focus on community development and disease prevention. Stan Rowland brought the CHE strategy with him, and for many years continued to develop and refine this holistic strategy as it spread around the world. Today it has become a CHE movement. 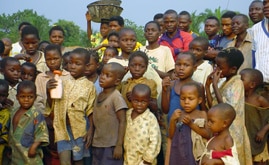